Hurricane Season is upon us. Look for tips on how to prepare here, and check alerts often for service updates and information.  Learn more about hurricane preparedness. 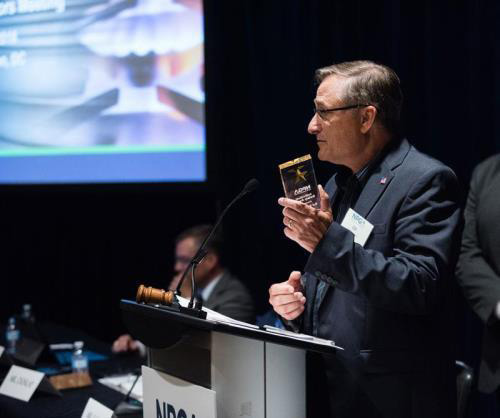 Former Director of our AmeriGas Cylinder Exchange Reconditioning, Ed Ferguson received National Propane Gas Association's Safety Award this past month. The award honors his outstanding contributions to safety in the propane industry in his role at AmeriGas and as Chairman of the NPGA’s Cylinder Exchange Council. Ed retired from AmeriGas at the end of last year after 37 years with the company.

He began his career in 1980 as a service tech and driver after being honorably discharged from the military, where he served in both the Marine Corps and Navy. He made major contributions to safety in our field and lead an effort that resulted in landmark changes to the International Fire Code. Ed also co-authored “Static Electricity in the Propane Industry,” a guide to reduce the risk of ignition at tank filling operations.

“I’ve accomplished a lot throughout my career, but it hasn’t been alone,” said Ed. “I had the honor of working with many talented people in our industry, both inside and outside of AmeriGas. I’m very humbled to receive this award. It means a lot to me because a majority of my career has been focused on the safety of our employees and customers. I’m honored to be a part of achieving the results we did.”