Back to Blog List Page
There’s a crisp chill in the air now (in most parts of the US, anyway) and that can only mean one thing: people are thinking about propane prices! Propane pricing is a complex topic, mostly because there are a vast array of factors impact the price of propane.

We’ve posted some write-ups on pricing on this blog in the past such as Winter Propane Pricing and Understanding Propane Spot Pricing.

This time around, we are doing a three-part pricing series focusing of the following topics:

Part 1: Pricing Factors — In this part we’ll take a look at what factors influence the price of propane what affect those factors have had on prices in past years.

Part 2: Current Trend —Part two will focus on what’s currently happening in the market and how that’s impacting prices. We’ll take a look at current production, infrastructure and the climate outlook for the 2015-2016 heating season; when prices and demand are most likely to fluctuate.

Part 3: Future/Long-Term Trend —This third and final part of the series will highlight pricing predictions for the next couple of years. We’ll also take a look at the global economic environment impacting propane and energy in general as well as anticipated energy consumption.

Let’s get on with Part 1 and take a closer look at the five largest factors which affect prices.

The supply of propane available to US consumers plays one of the largest roles in price determination. Even as recently as a decade ago, propane prices were much more likely to spike unexpectedly because there simply wasn’t enough being produced (or imported) to handle any unforeseen uptick in demand. Residential consumers generally require large amounts of supply in the winter months, therefore propane inventories are amassed prior to the winter. Currently, the United States produces more propane than it ever has before.

Consumer demand varies depending on residential or commercial applications for propane. Commercial customers generally have a predictable need throughout the year. Think of propane being used in warehouses to fuel forklifts, restaurant appliances, etc. If seen on a graph, you will see fluctuations in consumption of propane for commercial use but for the most part, the line will stay predominantly steady. Residential consumers on the other hand may use a small, steady amount throughout the year but the amount of gallons they use increases dramatically in the winter months; which leads us to the next contributing factor for price: Weather.

We still can’t get it quite right. It seems like when there’s a “15% chance of rain” it actually rains most of the day. And when you hold off on buying that snow blower because you’re told it’s going to be a “mild winter” snows two feet at a time until spring. This very unpredictability of weather is why it can have a large effect on prices.

Inventories are generally built-up prior to the winter months. That means propane producers estimate how much propane will be needed throughout the year. Anything that is produced over that estimate generally gets exported. Since we can’t accurately predict weather for an upcoming season, any unforeseen cold weather can put a strain on existing inventories.

Here’s how the U.S Energy Information Association (EIA) describes this strain on inventory:

“Colder-than-normal weather can put extra pressure on propane prices during the high-demand winter season because there are no readily available sources of increased supply except for imports. And imports may take several weeks to arrive, during which time larger-than-normal withdrawals from inventories may occur, sending prices upward. Cold weather early in the heating season can cause higher prices sooner rather than later, because early inventory withdrawals affect supply availability for the rest of the winter.”

Propane is a bi-product of crude oil and natural gas. When oil is being turned into other products such as gasoline or heating oil, some propane is produced as a bi-product of that event. The same holds true for raw natural gas processing. During this processing, other gasses are emitted which form propane. Because propane can only be made by producing another product (oil and natural gas), the volume produced cannot be controlled during times where demand or prices fluctuate. Propane availability is dependent on the production of oil and natural gas. Even though propane comes from these two sources its price, however, has historically followed that of crude oil rather than natural gas. 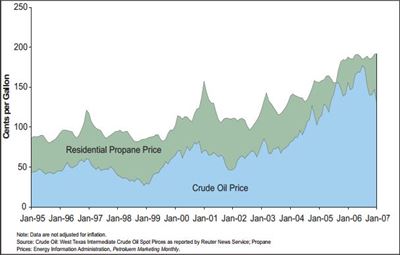 Although propane prices (similar to prices for most widely used fuels) have fluctuated up and down, they have risen at a steady rate, overall for the past ten-plus years.

The distance propane has to travel to reach a particular region of the United States will impact the price in that area. From the time it is extracted from oil and natural gas processing, propane must travel long distances to reach most consumers. The majority of bulk terminals and distribution centers are located along US Gulf Coast and in the Midwestern states. From these locations, everything from a network of pipelines, trucks, railroad cars and barges/tanker ships are used to distribute propane around the United States. Therefore, consumers who live closest to major distribution terminals often pay the lowest prices because their propane does not have the added cost of long-range distribution.

Diagram from EIA showing movement of propane from production to end consumer.

Now you can see why propane pricing is so complex. There are various factors which influence price and some of these factors are not very predictable. Stay tuned for the second installment in our Pricing Series where we’ll look at the current pricing trend including current production levels, infrastructure and the upcoming 2015-2016 winter season.